There are 150 coulombs of charge passing a point in a circuit in 10 seconds. What is the current through the circuit?

Resistance (R) is a measure of how difficult it is to push charge along a conductor. It is measured by an ohmmeter and it has units of ohms.

The following formula is used to measure the resistance of a conductor:

The following equation represents the relationship between voltage, resistance and current:

The equation to measure the energy delivered to the circuit every second is the following:

Measure the current of the following circuit if the emf is 10V.

In a circuit with resistors placed in parallel the total resistance () in the circuit is calculated using the following equation:

Another additional consideration is that the potential difference is the same in each resistor placed in parallel however the current across each of these resistors is not the same. Also the current going into the junction must be equal to the current coming out of the junction.

Current across the 5Ω resistor =

Current across the 8Ω resistor =

Current across the 4Ω resistor =

The current in the circuit. 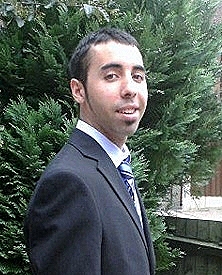 I am a graduate in Manufacturing Engineering and Management with 3 years of experience in tutoring students for GCSE Spanish and Physics. For my A levels I scored A in Physics, A in Spanish and B in Mathematics.